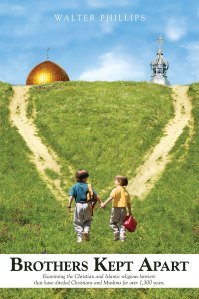 Christians and Muslims comprise over half of the Earth’s population. However, they have been kept apart for over 1,300 years because they have been taught that there are irreconcilable differences between the Bible and the Qur’an.

Having studied the Bible and early civilizations for over thirty years, and the Qur’an for over one decade, I have found that there is harmony between their principal teachings, without compromising any teaching or damaging the integrity of any verse in either book.

Brothers Kept Apart contains compelling and explicit evidence that exposes the myths that have unnecessarily divided Christians and Muslims for the past 1,300 years.
“In my opinion, the most important lesson from studying history is: never be afraid to re-examine the evidence in order to learn or verify the truth. We should never be afraid to critically examine claims of truth, for truth should be able to withstand rigorous scrutiny.” Walter Phillips BSc, BEng, MASC, MURP, CEng, FIStructE, FCIHT, MAPM, MCSCE, MBAPE

What does “scientific comparison” mean?

Previously, opinions of truth were established on the authority of a political or religious leader.  Anyone who dared question their opinions was severely persecuted.  Within the last 200 years, persons have started to question some of these opinions of established truth without the threat of severe persecution, and only in the last decade have previously restricted historical documents become easily accessible.

The scientific approach is that evidence must be interpreted honestly.  This means that:

Using this approach, I have found harmony between the principal teachings of the Bible and the Qur’an.

Do most Christian and Muslim leaders teach that there is harmony between both books?

What do you think are the three most important harmonious teachings?

Secondly, that both books teach that Jesus was born of the Virgin Mary, taught the Gospel, healed the sick, raised the dead, and is the Messiah.

Thirdly, both books teach that we should be reconciled to, and cultivate a personal relationship with God.

What are the biggest surprises that you have found?

The first is that it is likely that Mohammed was a prophet sent by God, since his teachings, during the initial 9 years, are similar to those of the Biblical prophets.

The second is that Muslims cannot hope to understand the Qur’an properly without first reading the Bible.  The Qur’an actually instructs readers to believe the revelation sent to the Old Testament prophets and the Gospel, and to copy and distribute it to the nations of the earth without compensation.

What harmonious teachings give you hope?

It is their prominence given to loving God and serving mankind over their religious rituals and traditions.  Perhaps a quotation from each book can explain.

Bible:  “Is this not the fast that I have chosen: To loose the bonds of wickedness, To undo the heavy burdens, To let the oppressed go free, And that you break every yoke? Is it not to share your bread with the hungry, And that you bring to your house the poor who are cast out; When you see the naked, that you cover him, And not hide yourself from your own flesh?” (Isaiah 53:6–7)

Qur’an:  “It is not righteousness that ye turn your faces Towards east or West; but it is righteousness- to believe in God and the Last Day, and the Angels, and the Book, and the Messengers; to spend of your substance, out of love for Him, for your kin, for orphans, for the needy, for the wayfarer, for those who ask, and for the ransom of slaves; to be steadfast in prayer, and practice regular charity; to fulfill the contracts which ye have made; and to be firm and patient, in pain and adversity, and throughout all periods of panic. Such are the people of truth, the God-fearing.” (2:177)

I am the author of the recently released book Brothers Kept Apart.  I hold earned Bachelor degrees in mathematics and structural engineering, and earned Masters Degrees in environmental engineering and land use planning, and have spent the past 20 years investigating evidence and designing solutions to problems.

It is considered unethical and intellectually dishonest for researchers to simply present their findings and refuse to defend them.  Brothers Kept Apart has been subjected to 7 years of pre-publication critical review; however, since it is now published, an opportunity must be found for readers to critically review it also.

I am happy to provide any additional information, and engage any reader on this and any ancillary topic in this forum or any other, so that we may all know the truth.

111 responses to “About this Site”